On an unforgettable night for the world’s heavyweight track and field nation, Noah Lyles stormed to 200m success, Donavan Brazier blitzed to a record-breaking 800m victory and Sam Kendricks edged a rip-roaring pole vault competition to retain his title.

Lyles was short of his absolute best in the mouth-watering final of the men’s 200m but still found enough in his locker to strike his maiden senior gold medal.

Great Britain’s Adam Gemili held a slight advantage leading into the home straight but Lyles did not panic and, finishing with his trademark late burst of speed, powered home to stop the clock in 19.83 – 0.12 clear of Canada’s Andre de Grasse, who matched the silver medal he won at the Rio 2016 Olympic Games.

Bronze went to the swift-finishing Alex Quinonez in 19.98, who became only the second Ecuadorian in history to win a World Championships medal.

Donavan Brazier laid waste to the field with a sensational display to become the first US athlete – man or woman – to win a world 800m title – by pulverising both the championship record and North American records, which had each stood for more than 30 years.

The 21-year-old two-lap sensation turned the race into a procession after kicking past Wesley Vazquez, who had set a searing first lap split of 48.96, to open up a huge margin on the field.

Attacking the final 100m with relish, he destroyed the opposition to clock 1:42.34 and triumph by the biggest winning margin in the history of the event at a World Championships. Amel Tuka of Bosnia and Herzegovina upgraded on the bronze medal he won at the 2015 World Championships to take a splendid silver in 1:43.47 ahead of the quick-finishing Ferguson Rotich of Kenya, who snared the bronze in 1:43.82.

The US enjoyed more success in the men’s pole vault as Sam Kendricks edged a belting pole vault competition from Sweden’s Armand Duplantis to become the first man since athletics icon Sergey Bubka to mount a successful defence of this title.

Kendricks twice teetered on the edge of defeat but, demonstrating trademark mental resolve, he cleared both 5.87m and 5.97m at the third time of asking. Duplantis also wriggled over at 5.97m with his final effort but ultimately Kendricks’ first-time clearance at 5.92m earned him gold on countback.

Duplantis had to settle for the silver with Piotr Lisek of Poland taking the bronze with 5.87m, adding to silver and bronze medals he has earned at the two previous World Championships.

With one mighty boom of the right arm, Kelsey-Lee Barber cracked the code to deliver Australia’s first world javelin title with a thrilling sixth-round effort.

Twice before Australia has claimed silver in this event (Joanna Stone in 1997 and Kim Mickle in 2013) but Barber's perfectly timed 66.56m effort elevated her from fourth to gold.

China, who held first and second until Barber's effort, had to settle for the two bottom steps of the podium with Liu Shiying in silver (65.88m) and world leader Lyu Huihui (65.49m) winning her third World Championships medal (one silver and two bronze).

Dina Asher-Smith looked a class apart as she topped the qualifiers from the women’s 200m semi-finals. The British athlete eased to victory in the third semi-final in 22.16 from US champion Dezerea Bryant (22.56). Gina Bass made history as the first athlete from The Gambia to qualify for a World Championships final, placing third in her semi-final with 22.60 and advancing on time.

A competitive first semi-final was awarded to NCAA champion Anglerne Annelus from Switzerland’s Mujinga Kambundji after both were awarded the same time of 22.49.

Olympic champion Elaine Thompson withdrew from the second semi-final, leaving the path clear from US sprinter Brittany Brown to take top spot in 22.46 and push forward her medal claims.

Tynia Gaither of The Bahamas (22.57) grabbed second to advance to her second successive World Championships 200m final, 0.01 ahead of Bulgaria’s 35-year-old Ivet Lalova-Collio, who progresses on time to the medal race.

The two prime contenders in the women’s 400m – Salwa Eid Naser and Shaunae Miller-Uibo – gave a tantalising glimpse of what they are capable of in Thursday’s final with a pair of top quality semi-final performances.

Naser, the Diamond trophy winner, set off with purpose, opening up a huge lead in the first semi-final before easing down to take top spot in 49.79. Defending champion Phyllis Francis registered a season’s best of 50.22 to progress in second as she seeks to become the first athlete to win back-to-back women’s world 400m titles since Cathy Freeman 20 years ago.

Olympic champion Miller-Uibo looked ridiculously easy on her way to winning semi-final number two. The tall Bahamian trailed Olympic bronze medallist Shericka Jackson through 250m before gently easing on the power to record 49.66 – offering possibilities that she is on track to record a sub-49-second time in the final.

A late charge by Wadeline Jonathas enabled the US sprinter to overhaul Jackson to secure the second automatic qualification spot in a personal best of 50.07. Jackson was 0.03 further back but advanced as one of the two fastest times.

The three fancied athletes in the men’s 400m all made relatively light work of the first-round heats.

US champion and 43.64 man Fred Kerley conceded defeat to Italy’s Davide Re in heat three but qualified in second place with ease. Kerley put in the hard work around the first 300m before coasting down the home stretch to stop the clock in 45.19 – 0.11 behind Re.

Diamond trophy winner Michael Norman adopted the opposite approach to Kerley. Preferring an easy middle section, he worked harder down the home stretch to grab the heat four win in 45.00 by 0.02 from Jamaica’s Demish Gaye.

World silver medallist Steven Gardiner of The Bahamas could not have looked any easier in heat five, cruising to victory in 45.68 – 0.21 clear of Canada’s Philip Osei.

The wildcard in the field could be 2011 world and 2012 Olympic champion Kirani James. The Grenadian, competing in only his second race of the year following a succession of injury problems, hinted at his medal potential, easing to victory in heat two in 44.94.

The main casualty of the first round heats was world bronze medallist Abdalelah Haroun. Running in his first 400m of the season, the Qatari athlete took to the blocks in heat six but wound up a distant sixth in 47.76.

Billed as one of the head-to-head battles of the World Championships, world record-holder Dalilah Muhammad and Diamond trophy winner Sydney McLaughlin both advanced without drama to Wednesday’s semi-finals in the 400m hurdles.

McLaughlin could not have looked more comfortable, cantering to the heat one win in 54.45 to top the qualifiers ahead of European champion Lea Sprunger (54.98). Muhammad grabbed the No.1 position in heat three in a slightly slower 54.87 but was no less impressive.

World University Games bronze medallist Amalie Iuel produced one of the most eye-catching performances of the found, taking out heat four in 54.72 and destroying her Norwegian record by 0.43.

Heat two witnessed the end of the road for world champion Kori Carter as the US hurdler quit just beyond halfway when trailing the field.

Mutaz Barshim offered genuine optimism he is in the mood to retain his world high jump title with a flawless performance during qualification. The home hero has been unconvincing in his handful of competitions this year but made four first-time clearances up to and including a season’s best mark of 2.29m.

The main drama in the first round of the men’s 3000m steeplechase was reserved for an incident-packed heat three. Defending champion Conseslus Kipruto has endured a challenging countdown to Doha, but he looked like he was approaching his swaggering best to take the win in 8:19.20 from his fellow Kenyan Benjamin Kigen. He cheekily gave the fans a wave with 200m remaining before chatting and gesticulating to his team mate much of the way down the home straight.

Seven men exceeded the automatic qualification distance of 76.50m in the men’s hammer with the pick of the bunch Pawel Fajdek, who pummelled the hammer out to 79.24m – making a clear statement he is in the mood to claim a fourth successive world title.

Compatriot and European champion Wojciech Nowicki led the qualifiers from pool A with a first-round effort of 77.89m. Ukrainian teenager Mykhaylo Kokhan (76.56m) also progressed to become the youngest man in history to compete in a World Championship men’s hammer final.

BACK
Pages related to this articleCompetitions
World Athletics Championships 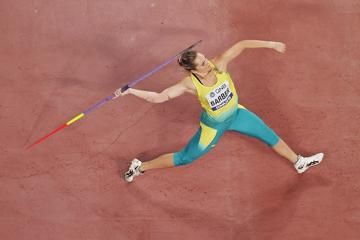