For the second time in three competitions this year, Yaroslava Mahuchikh broke the world U20 indoor high jump record with a 2.02m* leap to highlight the Indoor Meeting Karlsruhe on Friday (31).

Opening with back-to-back clearances at 1.85m and 1.89m, the rising Ukrainian star topped 1.99m on her first attempt to wrestle the lead from compatriot Yuliya Levchenko, whose first miss of the night came at that height. She then cleared on her second attempt, raising the bar to 2.02m.

Mahuchikh hit the bar on the way down on her first attempt but it stayed on, adding another centimetre to the U20 mark she set in in Lviv 13 days ago.

She continued with three tries at 2.04m, the third coming closest. Her success didn’t surprise her.

"Yes I expected it because in Cottbus two days ago I tried 2.02m, and I thought I could do it here. And I did it on my first jump,” said Mahuchikh, who topped a world U20 outdoor record of 2.04m to take world silver in Doha last year. Revisiting that height isn’t too far off either, she said.

"My third jump was very close so I hope next time I will make it."

Mahuchikh's was one of five early season world leads that electrified the capacity crowd of 5000-plus at the DM Arena for the 36th edition of the meeting, this year serving as the second stop of the World Athletics Indoor Tour in which athletes compete for points in designated tour disciplines.

Another came in the women's long jump where the late-hour entry of world champion Malaika Mihambo energised the proceedings. Despite some early problems with her rhythm, Mihambo came through with a 6.76m leap in the second round, another world lead. But it was short-lived.

Maryna Bekh-Romanchuk of Ukraine, who finished second to Mihambo at the World Championships last year, took command in the next round with a 6.92m leap, adding seven centimetres to her indoor career best and ultimately putting the competition out of reach. Mihambo improved to 6.83m in round four before deciding to retire for the night.

The most impressive performance on the track came in the women's 3000m where Fantu Worku admirably lived up to her favourite's role, running away with a convincing victory in 8:37.58, another early season world lead.

The Ethiopian, who at just 20 already has two World Championship sixth-place finishes to her credit - over 3000m in 2018 indoors and 5000m in 2019 outdoors - ran at the front over the final kilometre, clicking off 34 to 35-second laps to easily fend off Quailyne Jebiwott Kiprop, who clocked 8:40.27 for second. Further back, Luiza Gega was third in 8:44.46, an Albanian record.

Tobi Amusan was also pleased with her victory in the 60m hurdles.

The rising Nigerian star took control by the midway point and powered away to a 7.84 win, clipping 0.03 from her previous best.

“The goal was just to come out and execute every round and I think I did that,” said Amusan, who was fourth in the 100m hurdles at last year’s World Championships. “We’ve been working on the weakest part of my race - the first four hurdles.”

She races next in Dusseldorf on Tuesday.

Christina Clemons of the US was second in 7.98, holding off Finland's Reetta Hurske, Italy’s Luminosa Bogliolo and Hungary’s Luca Kozak who crossed the line in unison, clocking 8.02.

When she held off Lemlem Hailu's attempt for the lead at the bell, world steeplechase champion Beatrice Chepkoech looked to be in firm command of the evening-capping 1500m. That appearance held up until the final 20 metres when it quickly began to unravel.

Fading badly on the inside, three runners swept by on the outside, with Axumawit Embaye prevailing in a blanket finish in 4:07.94, just ahead of Ugandan Winnie Nanyondo (4:08.06) and Hailu who finished off an Ethiopian 1-3.

Earlier, Bethwel Birgen won his second 3000m tour race in six days, this time holding off Bahrain's Birhanu Balew by nearly a second and a half in 7:38.50, another world lead and lifetime best for the Kenyan veteran.

Elsewhere on the point-scoring programme, Mostafa Smaili took a commanding victory in the 800m in 1:46.38, another early season world lead. The slight Moroccan took the lead at the bell, quickly built a comfortable gap and was never tested. Alvaro de Arriba of Spain was a distant second in 1:47.87.

Mostafa Smaili, winner of the 800m at the World Athletics Indoor Tour meeting in Karlsruhe

Meanwhile, there was an unlikely bit of synchronicity in the women’s 400m where the winners of the two heats were credited with the same time, 52.56: Ayomide Folorunso of Italy in the first and Swiss Lea Sprunger in the second. Folorunso was given the nod.

Renaud Lavillenie won the pole vault on countback at 5.70m, holding off brother Valentin and Dutchman Menno Vloon. World champion Sam Kendricks had an off night, leaving the competition after three misses at 5.60m to put an inauspicious end to his streak of consecutive 5.80m meetings, which he extended to 14 in Cottbus on Wednesday.

The men's long jump, another non-scoring event, came down to the final leap - by design. In a one-off experimental set-up, the top three jumpers from the first five rounds earned a sixth leap, with the farthest in the final round declared the winner.

With a slot of its own on the programme, the final round did command and receive the crowd's attention. Ukraine's Vladyslav Mazur went first but faltered, reaching just 7.67m, well down on his 7.84m best from round five.

Eusebio Caceres, however, responded well, reaching 7.99m to apply the pressure on hometown hope Julian Howard, who led the competition after five rounds at 7.88m. Energised by the vocal fans, Howard landed well beyond the eight-metre mark but behind him a red flag was raised, handing victory to the Spaniard.

There were emotional highlights off the track, the most rousing a medal ceremony for retired javelin thrower Christina Obergfoll who received her bronze medal from the 2011 World Championships. The crowd honoured Obergfoll with a stirring five-minute standing ovation, quite likely the longest and loudest she'd ever experienced, before being presented by flowers, high fives and hugs from several retired German athletes.

The action this evening wouldn't have been possible without the strong legacy and foundation the meeting has been built upon. Its contribution to the sport was recognised at a ceremony this afternoon as World Athletics CEO Jon Ridgeon presented organisers with the World Athletics Heritage Plaque.

"World Athletics is proud to honour the Indoor Meeting Karlsruhe," Ridgeon said during a ceremony at Karlsruhe's Town Hall. "The exciting and engaging competition, which annually sees this meeting play out to a packed stadium, has been hugely influential in the development of interest in international indoor athletics." Ridgeon later made a brief presentation during the meeting itself.

Launched in December 2018, the Plaque is awarded for “an outstanding contribution to the worldwide history and development of the sport of track & field athletics and of out of stadia athletics disciplines such as cross country, mountain, road, trail and ultra-running, and race walking."

For more than 30 years the Indoor Meeting Karlsruhe has attracted world and Olympic champions at the start of each year. Established in 1985, the meeting was first held at the Europahalle but in 2015 moved to the DM-Arena. Two of the current women’s world indoor records were set in Karlsruhe: Genzebe Dibaba at 1500m in 2014 and Susanna Kallur at 60m hurdles in 2008.

The World Athletics Indoor Tour resumes on Tuesday (4) with the PSD Bank Meeting in Dusseldorf.

BACK
Pages related to this articleAthletes
Yaroslava MAHUCHIKH 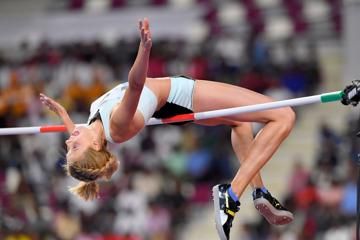 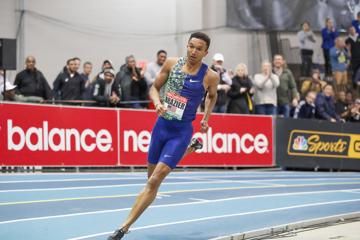