As the Australian city of Bathurst prepares to host the 2021 edition, an economic and social impact study has demonstrated the huge benefits of the Danish city of Aarhus hosting the 2019 IAAF World Cross Country Championships.

The organisers wanted to showcase the potential future of cross country and that running is not only about roads and track. They also wanted to demonstrate to spectators that running can be enjoyable for all. Therefore, for the first time ever at this event, amateur athletes who had recorded a good enough qualifying time were given the opportunity to compete against the elite athletes.

The course was situated in the grounds of the Moesgaard Museum, a striking piece of modern architecture built in 2014, which houses collections dedicated to local archaeology and ethnography. Combining culture, nature and architecture with sport, a part of the course even saw athletes running up and down its steep grass roof. The 10% gradient of the roof added an additional challenge to the course, in addition to the mud, sand and water obstacles which all contributed to the excitement of the race. 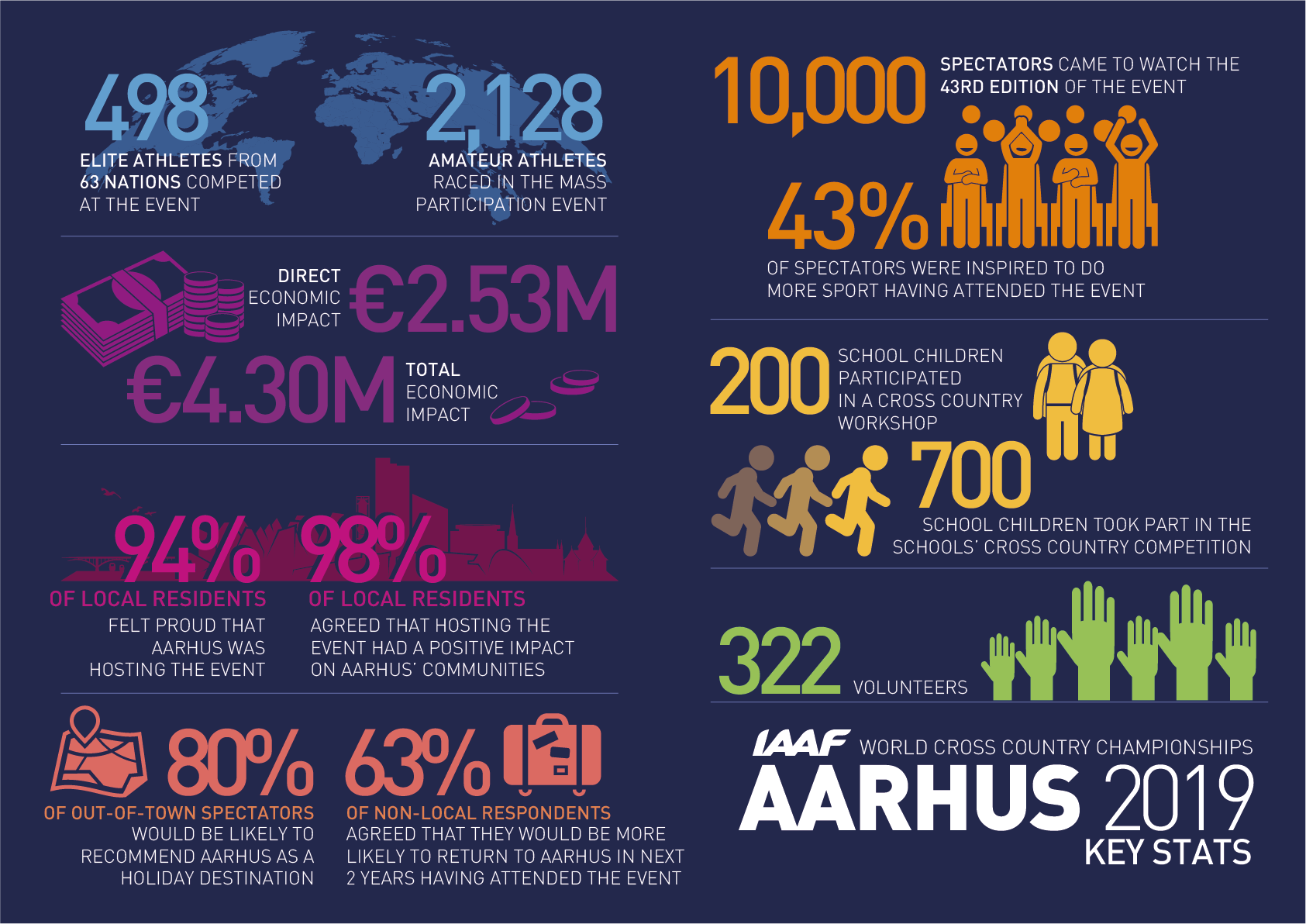 The event brought together almost 500 elite athletes from 63 nations across five events, in addition to the 2128 amateur athletes who also competed in other categories on the day.

During and after the event, surveys were completed by spectators, athletes, mass race participants, sponsors and media, the results of which contributed to the economic impact study.

The study, delivered by The Sports Consultancy, assessed the total direct economic impact of the championships as exceeding €4.3million. 94% of local residents felt proud that Aarhus hosted the event, while 43% of the spectators were inspired to do more exercise as a direct result of attending the championships.

Attention now turns to Bathurst as Australia prepares to host the IAAF World Cross Country Championships for the first time.

The local organising committee recently revealed the logo for the championships, which will be held on 20 March 2021. The visual identity reflects World Cross Country the Australian way and celebrates Australia’s diverse culture, landscape and lifestyle. The boomerang, an iconic symbol of Australian culture, has been carefully arranged within the wave shape to resemble the legs of a group of runners in a style that is truly unique to Australia.

“Cross country was the basis of everything I went on to achieve as an endurance runner,” says IAAF President Sebastian Coe. “That’s why I was so pleased to be part of an IAAF Council who came behind this bid.

“The World Cross Country Championships are very important to us. I committed myself, when I became president of the IAAF, to really revamp the importance of these championships. We had a great last edition in Aarhus in Denmark, and I know Bathurst – an iconic motor sports venue that means so much to so many Australians – will be a fitting site for us to take the cross-country journey further and with more excitement and engaging fans and new competitors.”

Show me all articles for: