He is already the history man of marathon running but Eliud Kipchoge will be chasing another record-breaking milestone when he lines up for Sunday’s 2020 Virgin Money London Marathon, a World Athletics Platinum Label road race.

----
Updated 17:00 CEST: Kenenisa Bekele was forced to withdraw from the race on Friday afternoon with a calf injury.
----

A victory for the mighty Kenyan would make him the first able-bodied athlete, male or female, to win five London Marathon titles, taking him past the great Norwegian Ingrid Kristiansen, with whom he is currently tied on four wins.

Meanwhile, women’s world record-holder Brigid Kosgei is the hot favourite to make it a Kenyan double by lifting her second successive London crown.

Positive thinking has always been Kipchoge’s mantra, and he is typically confident he can add to the London titles he won in 2015, 2016, 2018 and 2019, despite the peculiar circumstances surrounding this year’s race due to the Covid-19 pandemic.

“I am feeling well and happy to be back in London to run for my fifth title,” he said at a socially distanced pre-race press conference in midweek. “I think the race will be a really fruitful one for us on Sunday and a fast race.”

Kipchoge, the Olympic champion, world record-holder and the first man to break the two-hour barrier in last year’s unofficial challenge in Vienna, has turned the London Marathon into a personal tour de force in his four previous appearances, not least when he delivered a front-running masterclass last year to triumph in a course record of 2:02:37.

But this year, in what will be the 40th edition of the race, there are a number of unknown factors to occupy Kipchoge’s thoughts as he plots his path to the finish line: a dramatically different course, the absence of any spectators and a host of top-quality opponents.

Kenenisa Bekele, one of Kipchoge's biggest rivals on the track and the second-fastest man in history for the marathon, had been set to race in London in one of the most highly anticipated clashes of the year. But a niggling calf injury ruled the Ethiopian star out of Sunday's race.

"I am very disappointed that I cannot race on Sunday," Bekele said on Friday. “It has been a tough preparation time with lockdown when I couldn’t have my NN team around me. I was in good shape but then I picked up a niggle in my left calf after two fast training sessions too close together in the last weeks of preparation. I have been having treatment every day since then and I truly believed I would be ready but today it is worse and I now know I cannot race on it."

In Bekele's absence, Ethiopia's Mosinet Geremew and Mule Wasihun appear most likely to take the challenge to Kipchoge. Both tried valiantly in last year’s race, hanging on to Kipchoge’s coat tails until two miles from home and recording two of the fastest marathon times in history. Geremew’s clocking of 2:02:55 to finish second puts him fourth on the world all-time list.

Other athletes to watch are Sisay Lemma, Tamirat Tola, Marius Kipserem and Shura Kitata, all of whom have run inside 2:05.

Like Bekele, Kipchoge had to adjust to the rigours of solo training after the pandemic forced the closure of his training camp in Kaptagat, Kenya, though he has recently been able to return to group work.

“It was hard to get fit and up to a high level of training. But lately we have consolidated a bigger team around me and training has been good.”

A closed course, no spectators

The pandemic has forced the race organisers to ring the changes for what will be the first major city marathon to be staged since Tokyo in March.

Postponed from April, the race will take place over 19 laps of a closed-loop course around St James’s Park in central London, with only elite athletes competing and spectators excluded. World Athletics President Sebastian Coe will be the official starter for both the men’s and women’s races.

All of the athletes and their support teams have been cocooned in a ‘secure biosphere’, with exclusive use of an out-of-town hotel and regular health checks.

Runners were also required to undergo Covid-19 tests before flying to London, which resulted in the highly promising Degitu Azimeraw, a debut winner at the 2019 Amsterdam Marathon, testing positive at home in Ethiopia and being forced to withdraw.

In her absence, the women’s race looks like Kosgei’s to lose after her sensational world record of 2:14:04 in Chicago last October, carving more than 80 seconds off Paula Radcliffe’s 16-year-old mark.

The experience has made her even more determined to lower the record even further.

“It made me more encouraged to do a lot of training and to focus on training so I could try to break that record again,” she said.

Breaking records will not be on Kosgei’s mind on Sunday, however. She admits racing on a tight, looped course will be a step into the unknown, while the pandemic has restricted her training volume compared to 2019.

“Due to the pandemic I will not say I will run ‘this’ or ‘this’ [time] because the coronavirus affected us,” she said. “We didn’t do a lot of training like last year.”

Fellow Kenyan Vivian Cheruiyot, the 2018 London champion, will be among her principal challengers, though Kosgai beat her convincingly to win her first London crown last year, finishing almost two minutes ahead after a storming second half to the race.

Another compatriot, Ruth Chepngetich, will be making her London debut following her World Championships victory in the heat of Doha last year. With a personal best of 2:17:08 from last year’s Dubai Marathon, she is the second fastest woman in the field.

In an intriguing sub-plot to the main battle for honours, four-time Olympic champion Mo Farah will be participating in Sunday’s race as a pace-maker for a group of male runners chasing the Tokyo Olympic qualifying standard of 2:11:30.

Farah, himself, is committed to competing on the track rather than the roads in Tokyo but was happy to accept the invitation to perform pace-making duties as it fitted into his training schedule. A number of female runners will also be chasing the women’s standard of 2:29:30.

World Athletics announced in July that it was lifting its suspension of the Olympic qualification system for marathon races and race walks from 1 September, making results recorded in Sunday’s race eligible for Tokyo. 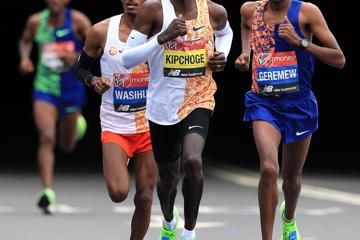 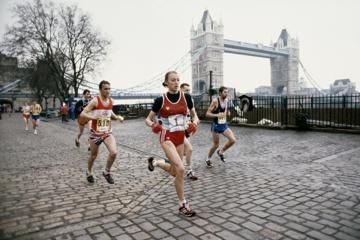 10 iconic moments from the London Marathon ... 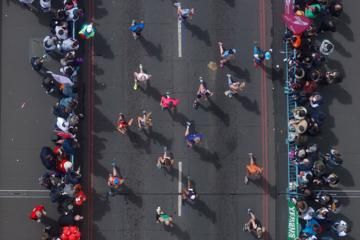 London Marathon to go ahead as elite-only rac... 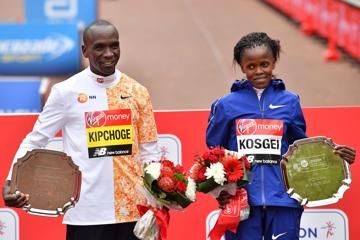