In the latest in our series of features in the countdown to the World Athletics Half Marathon Championships Gdynia 2020, we look back at five of the finest performers from past championships.

The man known as “Mr. Half Marathon” lived up to the moniker by securing a record-breaking five world half marathon titles during a sublime career over the 21.1km distance.

An outstanding talent on all surfaces, Tadese also won 2004 Olympic 10,000m bronze and the 2007 world cross country title. But the Eritrean was perhaps best suited to the half marathon.

Physiologically gifted – tests found he required much less oxygen per kilometre than many of his contemporaries – he set two world records over the distance, including his 58:23 mark set in Lisbon in 2010 which stood for eight years.

Yet it was probably his outstanding success at the World Half Marathon Championships for which he is best remembered. Tadese captured four successive titles from 2006*, the year he captured Eritrea’s first world title, to 2009, and then collected a fifth in 30c temperatures in Kavarna, Bulgaria in 2012.

His 2007 gold in Udine was secured courtesy of a national record (58:59), although his most eye-catching global title victory came 12 months later in Rio when he secured the top spot by a near two-minute margin. In 2010 he also snared an individual silver and secured team gold for Eritrea in 2014 after placing fourth in the individual race.

If Tadese is commonly regarded as the greatest half-marathoner of all-time then Geoffrey Kamworor could be poised as the man to dislodge him of the title. 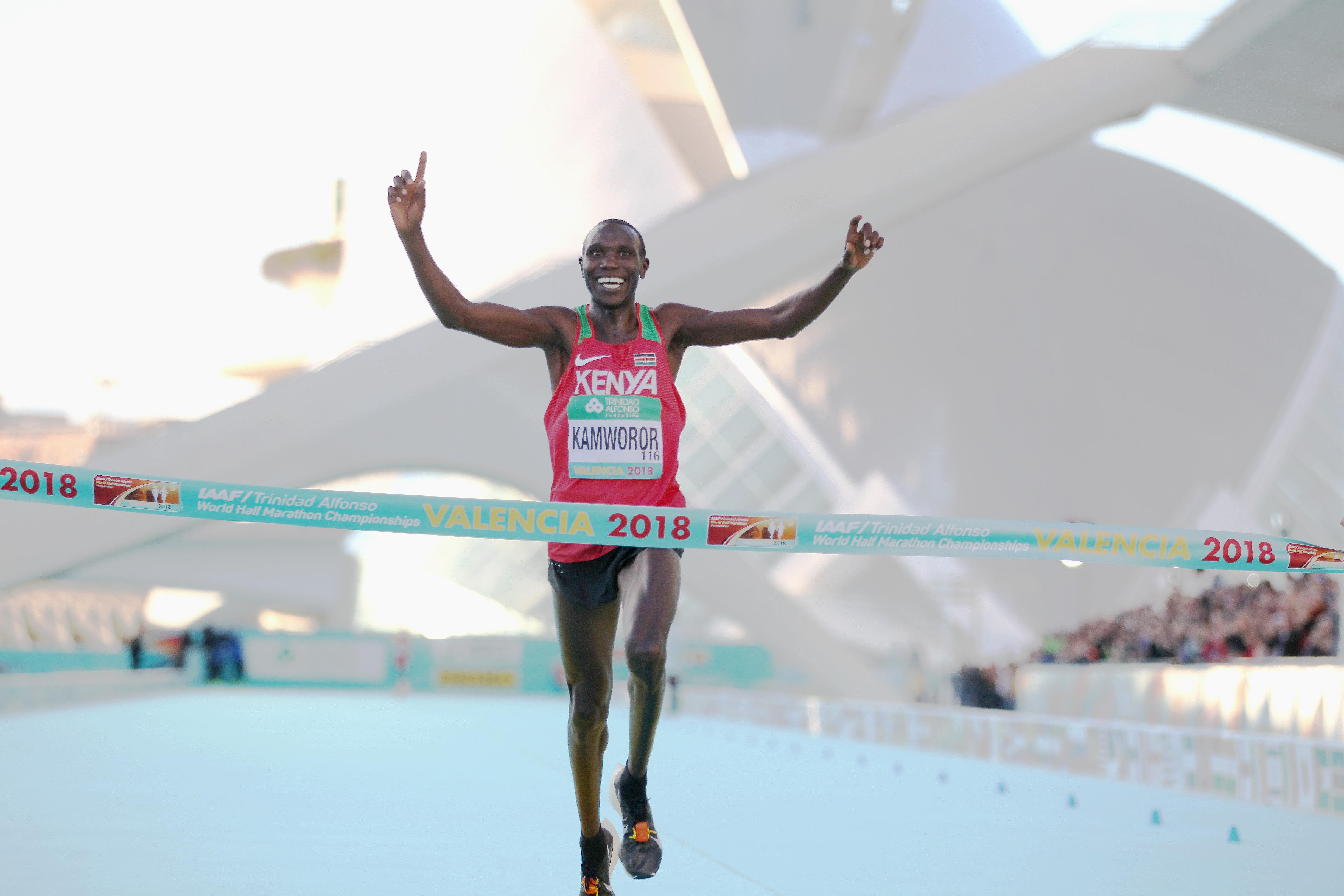 Kamworor has captured the last three titles over the distance. Taking his maiden title in Copenhagen when stopping the clock in 59:08, he retained his title two years later in Cardiff, despite losing his footing and slipping at the start, losing 15 precious seconds. The Kenyan completed the hat-trick two years ago by dismantling the field with a second 10km split of 27:46 in Valencia.

The 27-year-old has also claimed two world cross country golds, two New York City Marathon wins and a world 10,000m silver medal during his stellar career. Last year, he also added the world record for the 21.1km distance to his impressive CV, scalping 17 seconds from the previous mark with a dazzling 58:01 run in Copenhagen.

Today the diminutive Kenyan stands tall as a global advocate for peace, women’s rights and education but it is sometimes forgotten that during an earlier phase of her career, Loroupe was a distance running superstar who enjoyed sustained success over the half marathon distance. 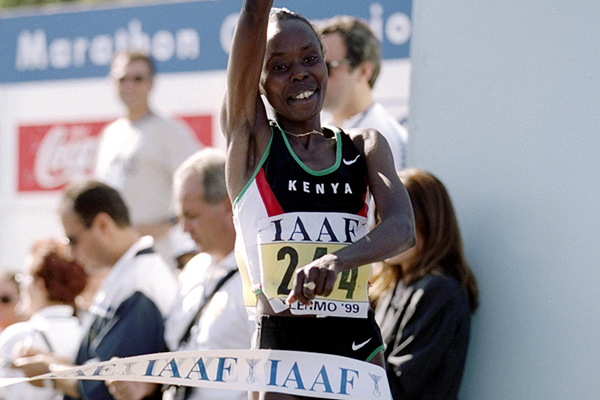 A world marathon record holder and winner of the New York City, Berlin and London marathons, Loroupe also became the first woman to claim a hat-trick of world half marathon titles from 1997-99. Four years after racing to bronze at the 1993 World Half Marathon Championships in Brussels, Loroupe romped to victory in Kosice, Slovakia in 1:08:14, a championship record.

The following year in Uster, Switzerland, she retained her title in an absorbing head-to-head battle with Elena Meyer, the 1994 champion, before clinching her hat-trick in Palermo where she defeated rising Japanese talent Mizuki Noguchi.

As a five-time world cross country champion, two-time Olympic 10,000m silver medallist and world marathon record-holder, Paul Tergat was a distance running colossus. But the Kenyan also boasted a proud record in the World Half Marathon Championships, winning back-to-back men’s titles in 1999 and 2000. 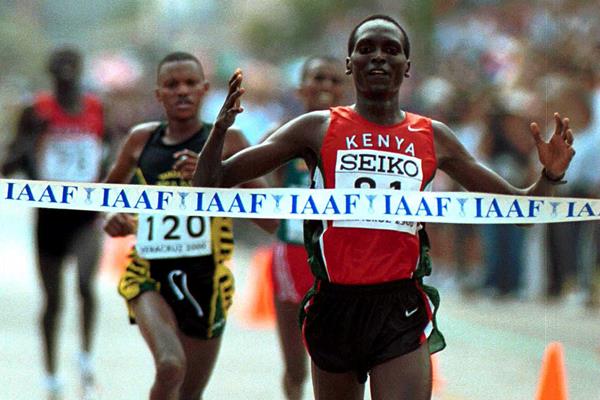 The Kenyan Air Force major first set a world half marathon record in Milan in 1993 with a 1:00:13 clocking before he reclaimed the mark with a blistering 59:17 on the same course five years later.

So when he took to the start line in 1999 for his debut appearance at the World Half Marathon Championships in Palermo he was rightly installed as clear favourite. Tergat lived up to the billing. Despite an official accidentally blocking his path 100 metres from the finish, he sprinted to victory in 1:01:50 defeating South Africa’s Hendrick Ramaala.

Just seven weeks after agonisingly missing out on Olympic 10,000m gold in Sydney by 0.09 to long-time rival Haile Gebrselassie, Tergat bounced back to mount a successful defence of his half marathon crown in Veracruz, Mexico.

Earlier that year, Tergat had lowered his world half marathon record by 11 seconds in Lisbon with a blistering 59:06 clocking and in hot and humid conditions in Mexico he proved too strong for the opposition to retain his title in 1:03:47, one second clear of Tanzania’s Phaustin Sulle. 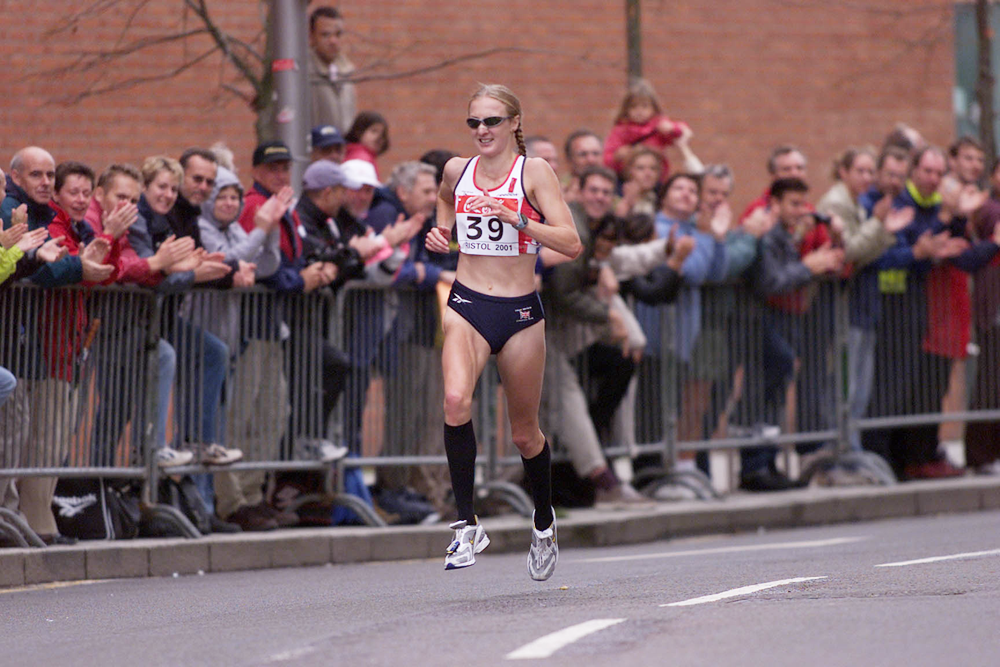 However, it was the first of her three half marathon championships victories, at the 2000 edition in Veracruz, which acted as the gateway to her future success.

Yet just three weeks after blasting to a 1:07:07 clocking to win the Great North Run, she finally snapped the streak of silver in the much hotter temperatures in Veracruz to clinch her first senior global title, defeating Susan Chepkemei of Kenya by 33 seconds.

Her World Half Marathon Championships story ended in 2003 as the Briton, who earlier that year had posted an eye-popping 2:15:25 world marathon record in London, secured her third title in Vilamoura, Portugal, defeating Berhane Adere by nearly a minute and a half in 1:07:35.

*In 2006 the event was staged as the World Road Running Championships over 20km.

BACK
Pages related to this articleAthletes
Paul Tergat

After second global title and third world record, Jepchirchir cements place in history as a half marathon all-time great

Having the physical tools is one thing, but to go where no woman has gone before – and set a world record – you need a whole lot of determination to go with it.

For the first time in the 28-year history of this event, a Ugandan athlete stood proud atop the podium, but it wasn’t the one most expected. In the men’s race at the World Athletics Half Marathon Championships Gdynia 2020 on Saturday (17), it was Jacob Kiplimo and not Joshua Cheptegei who reigned supreme, the 19-year-old coming of age with his first global title at senior level.