Johannes Vetter produced the standout performance among an all-star cast of talent at the Golden Spike in Ostrava, a World Athletics Continental Tour Gold meeting, on Wednesday (19), the German unleashing a 94.20m effort in the opening round of the javelin competition.

That was the third longest throw of the 28-year-old’s career, and gave him victory with 11 metres to spare over his nearest rival, world champion Anderson Peters, who threw 83.39m.

“It was a great throw,” said 2017 world gold medallist Vetter. “But of course the world record would be even better. It was great training for me. I made only small mistakes and managed to hit the javelin very clean.”

What a 🚀@jojo_javelin produces impressive 94.20m world lead with third biggest throw of his career.

The only man to have ever thrown farther than the German is @ZlataTretra meeting director and world record-holder Jan Zelezny.#ContinentalTourGold pic.twitter.com/FNYtb47c0d

The touted 3000m world record attempt by Joshua Cheptegei fell victim to the cold, windy conditions on the night, the Ugandan setting off on pace and passing 1000m in 2:26. He followed his second pacemaker Stewart McSweyn through the next two laps before being left alone to hit 2000m in 4:56.19. But with Daniel Komen’s world record of 7:20.67 then slipping out of reach, Cheptegei didn’t need to empty his tank thereafter but he maintained a decent pace to again stamp his supremacy over some world-class rivals.

“It was kind of a speed test for me,” said Cheptegei, who added that his next stop is the Golden Gala in Florence on 10 June, where he will race over 5000m. There, he will renew his rivalry with compatriot Jacob Kiplimo, who produced the performance of the meeting on the track four hours earlier. The world half marathon champion put on an exhibition in the 10,000m, moving to seventh on the all-time list with his time of 26:33.93.

The 20-year-old Ugandan coasted behind the pacemakers until 5000m, reached in 13:27.43, then shifted through the gears over the latter half, which he ran entirely alone in a blazing 13:06 to carve almost a minute off his previous best, which dated back to the 2016 World U20 Championships. 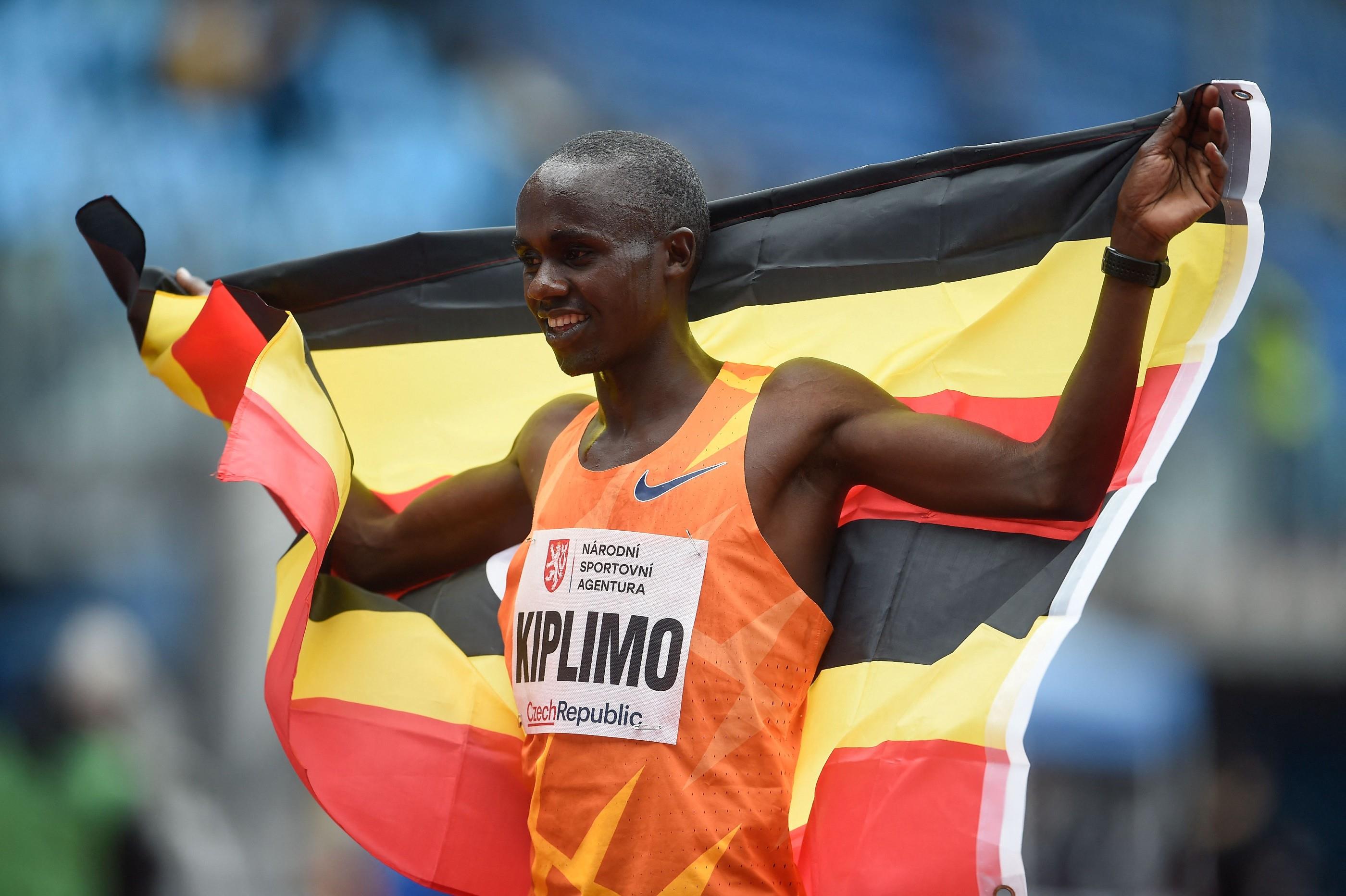 British teenagers Max Burgin and Keely Hodgkinson produced a pair of stunning performances in the 800m races, clocking respective European U20 records of 1:44.14 and 1:58.89.

Hodgkinson followed the pacemaker through the first lap in 58 seconds in the women’s race and hit 600m in front in 1:28.39, then powered away from her rivals to record her first ever sub-1:59 clocking.

“I knew I was in good shape but it’s different getting it out on the day,” said the 19-year-old. “The pacemaker did an amazing job and it was a perfect race. I could not ask for more.”

Burgin was rewarded for his bravery in going with the pacemaker – the only runner in the men’s 800m to do so – and clocked a world lead and European U20 record of 1:44.14. He came home well clear of Dutch athlete Tony van Diepen (1:45.36) and Britain’s Jake Wightman (1:45.47). The effort left him in some distress afterwards as he took several minutes to get to his feet in the mixed zone.

“I saw the race of my good friend Keely who ran just before me and she ran so fast so I thought, ‘I just have to match it at least,’” said Burgin, who only turns 19 on Thursday.

Marcin Lewandowski showed all of his typical tactical nous to kick to victory in the men’s 1500m in 3:35.57. “Those who know me know I start slowly,” he said. “But I’ll get better during the next weeks and months.”

Ethiopia’s Freweyni Hailu was a class apart in the women’s 1500m, clocking 4:04.20 to win from Slovenia’s Marusa Mismas-Zrimsek (4:07.50). World record-holder Genzebe Dibaba stepped off the track midway through the final lap when fading back through the field.

Getnet Wale coasted to victory in the men’s 3000m steeplechase, the Ethiopian running all alone for the latter half of the race and winning by 11 seconds in 8:09.47. Britain’s Phil Norman was next best in 8:20.12. “It was a good race, but the weather was a bit too cold and one pacemaker was not enough,” said Wale.

Sprint wins for Richardson and Kerley

Sha’Carri Richardson continued her winning ways with a facile victory in the women’s 200m, the 21-year-old US sprint sensation clocking 22.35 to beat Blessing Okagbare (22.59).

“It was a good result for the conditions and the weather, the girls definitely gave me a good push,” she said. “I just continue to make a statement that nothing I do is a fluke, everything is legit, it comes from hard work for me and my coach. I wanted to shout out to world that my bark may be loud but my actions and my bite are even louder.”

Richardson will return to the 100m at the Wanda Diamond League meeting in Gateshead on Sunday (23) where she faces Dina Asher-Smith and Shelly-Ann Fraser-Pryce.

Another statement from @itskerrii ‼️

Kirani James was an impressive winner of the men’s 400m, the 2012 Olympic champion clocking 44.74 ahead of runner-up Vernon Norwood (45.28). “I still have some work to do, things we can improve,” said James. “The time was important but the main thing was to perform well and stay healthy.”

“I got two good runs here, I cannot complain,” said Kerley. “I can get ready for the 400 now. To run both was part of the training cycle.”

Duplantis on top in rust-buster

Mondo Duplantis was off his best in the men’s pole vault, but these days even that is typically good enough given his ability, and so it was tonight. The Swede’s best clearance was his first-time effort at 5.90m, which ultimately gave him victory over Sam Kendricks who finished second with 5.85m. Duplantis went on to try 5.95m and 6.00m but was unsuccessful on a breezy night that was not ideal for vaulting.

“It was my first meeting of the summer so I just needed to get the rust away,” said world record-holder Duplantis. “I had a bit of a problem with the running part and just could not feel my legs doing the job I needed. But it showed me I am in pretty good shape.”

The touted head-to-head clash in the men’s triple jump between Hugues Fabrice Zango and Christian Taylor never truly materialised, with Taylor exiting the competition after sustaining an injury in the fifth round. He had a best on the night of 16.36m. Zango took victory with his fourth-round effort of 17.20m.

“The weather was great because the circle was faster after the rain and it suited me well,” she said. “I do not think I am in top shape yet but it should come just before the Olympics. I think it will be necessary to throw over 76 metres to get a medal in Tokyo.”

Germany’s Christin Hussong fared best in the women’s javelin, her fourth-round effort of 66.56m carrying her to victory ahead of Czech Republic’s Nikola Ogrodnikova (65.13m). World record-holder Barbora Spotakova finished fourth with a best of 59.49m.

Turkey’s Yasmani Copello was a comfortable winner of the men’s 400m hurdles, the 2016 Olympic bronze medallist clocking 49.21. Britain’s Jessie Knight broke her PB for the second time in four days when clocking 54.74 in the women’s 400m hurdles, which handed her victory ahead of Ukraine’s Anna Ryzhykova (55.09).

BACK
Pages related to this articleAthletes
Johannes VETTER Richardson and Benjamin impress with victorie...