The postponed Tokyo 2020 Olympic Games looked one step closer to reality in recent days with the staging of the athletics test events, the half marathon in Sapporo on Wednesday (5) and the Ready Steady Tokyo Athletics Meeting at the Olympic Stadium on Sunday (9). Athletes from around the world were tuning in to catch a glimpse of the courses, the facilities and the track they're hoping to compete on when the Games kick off in July, including two clusters of the Athlete Refugee Team from their bases in Tel Aviv and Ngong, Kenya.

One of them was Tachlowini Gabriyesos, a distance runner who trains with the Emek Hefer Club in Tel Aviv who achieved a major milestone at the Hahula Galilee Marathon on 14 March. Contesting the distance for just the second time, the 23-year-old Eritrean native clocked 2:10:55 to become the first refugee athlete to better an Olympic qualifying standard for the Tokyo Olympic Games.

"This (past) year was different because of the pandemic, but most of my training was as planned," said Gabriyesos, who has steadily moved up in distance over the past two seasons. He competed in the 5000m for the Athlete Refugee Team at the 2019 World Championships in Doha but in 2020 found a better fit with longer distances.

He was slated to compete at the World Athletics Half Marathon Championships in Gdynia, Poland, last October, but was unable to obtain a visa. So instead, two months later he improved his half marathon lifetime best to 1:02:21 in the prelude to his marathon breakthrough.

"I think I'm in better shape than I was last year, but physically and mentally it was hard to train with the pandemic restrictions."

Focusing on Tokyo has helped.

"The Olympics is my dream as a professional athlete and it would be a great honour to be part of the Refugee Olympic Team," he said. "I want to show others that everything is possible and they shouldn't give up."

The International Olympic Committee will announce the composition of its second Refugee Olympic Team (this year competing as EOR, its French acronym) in early June. While the selection process is complex, quality of performance will play a key role. Paulo Amotun Lokoro, a refugee from South Sudan and a member of the inaugural team in Rio, is hoping to make the cut again.

But unlike Gabriyesos, who has largely managed to navigate the pandemic restrictions over the past year, Lokoro, who is based at the Tegla Loroupe Peace Foundation training camp in Ngong, wasn't as fortunate. The camp was forced to close during the first lockdown in Kenya in April of last year, forcing Lokoro to return to the Kakuma Refugee Camp where, training-wise, he found himself alone. He returned to Ngong in December and resumed training only to be forced into another lockdown situation in the beginning of March. 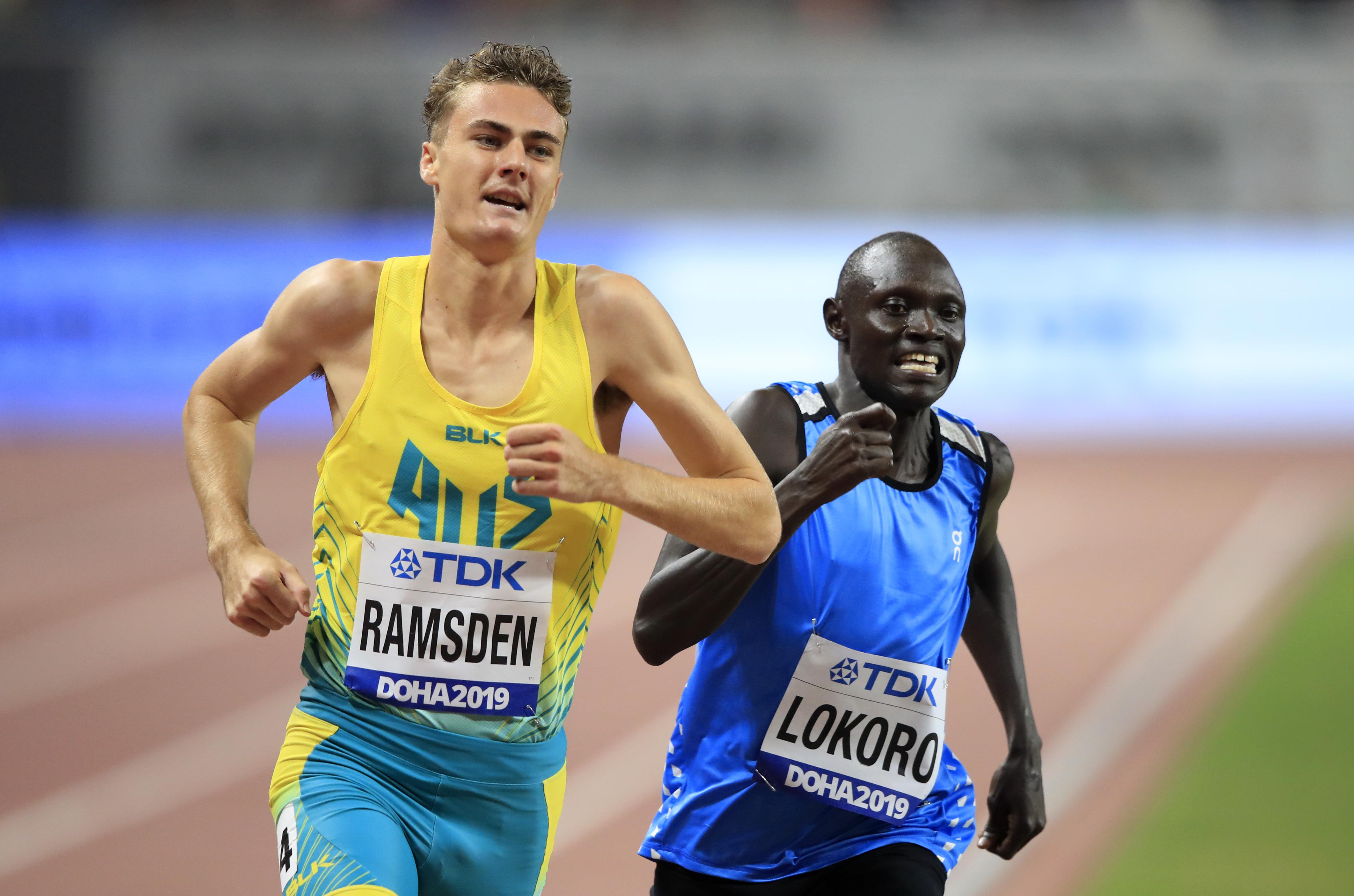 "It has been frustrating, we haven't had enough time to train," Lokoro said. "And during this lockdown the government has discouraged us from training in public and as a team, so we were training individually."

Lokoro finished 11th in his 1500m heat in Rio, clocking 4:03.96. He's improved steadily since, currently boasting a 3:44.10 lifetime best set in 2019. He also competed in Doha, but, suffering with a hamstring injury, didn't advance from the heats.

"In 2019 I was well prepared," he said. "My shape is different now, but we still hope to catch up before Tokyo."

Otmane Nait Hammou, a refugee from Morocco who is based in Sweden, made his Athlete Refugee Team debut at the 2018 World Cross Country Championships, competed in the steeplechase in Doha and more recently at the World Half Marathon Championships in Gdynia where he finished 67th, clocking 1:03:28 in his competitive debut over the distance and beating some of the world’s finest half-marathoners in the process. He's hoping for a spot on the steeplechase start line in Tokyo.

"World Athletics' support to compete at three World Championships did play a big role to keep me feeling hungry and motivated," he said. "With the solidarity support from the International Olympic Committee and my sponsors ON Running and Maurten and my French club ES Sartrouville, it has really made a difference.

"Honestly, it was really hard to keep motivated without having short term goals (during the pandemic), but you can't give up when it comes to the Olympic Games."

The pandemic and its lockdowns have impacted the group training in Ngong especially hard. Even with restrictions, athletes based in Europe were able to find some opportunities to compete in 2020 and 2021. For Lokoro and his teammates, their competition slates for 2020 had been all but wiped out. In 2021, just two competitions presented themselves: an Athletics Kenya cross country race in the first week of February and an AK athletics meeting three weeks later.

"We have been facing a lot of challenges, but at least we have been able to train individually," said Rose Nathike Lokonyen, a refugee from South Sudan who was the team's flag-bearer in Rio.

🏃🏿‍♀️ This week, meet Olympic athlete and UNHCR High Profile Supporter Rose Nathike Lokonyen. Rose was 8 when she fled violence in South Sudan to Kenya. In 2016, she participated in the Olympics in Rio de Janeiro. 👟

"In 2019 we were training as a team. When you train as a team that fitness and speed will come." It did for Lokonyen who clipped more than three seconds from her 800m career best in Doha. "Since we started in January, we trained for a few months and then the lockdown was put in effect. It's been difficult but we are hoping to compete in the competitions that are coming up."

Others are also trying to remain upbeat.

Before the pandemic hit, 5000m hopeful Ukuk Utho'o Bul said: "We were all training well, it was an Olympic year and we were preparing well. But when the pandemic came the camp closed so we all had to go back to where we came from. When we are training as a team there is a motivation. You always move forward, you motivate yourself. Then I was in a different place. I was alone and training alone. But we are trying our best."

Dominic Lokolong Atiol is another South Sudanese refugee targeting a spot in the 1500m.

"In my mind I am trying to be focused and ready for any trial or race. If I am there, I will take the chance and do my best."

Angelina Nadai Lohalith is also a South Sudanese focusing on the 800m and 1500m.

“It's been so tough for me because I've missed so many competitions and trainings," she said. "It has been challenging.

Back in Tel Aviv, Jamal Abdelmaji Eisa Mohammed, a refugee from Sudan who has been living in Israel since 2010 and a member of the Alley Runners since 2014, is another 5000m hopeful.

"Although it has been difficult to race in recent months, I was still able to run a few races and stay positive no matter what," he said. He's been struggling with injury in recent months, but is on the mend. "I am improving every day and I hope to be in full shape again by summer."

He is an IOC Refugee Athlete Scholarship-holder, a 100m sprinter, and he is currently training in Portugal.@Refugees @WorldAthletics @Tokyo2020 @Olympics#RefugeeOlympicTeam #Tokyo2020 #StrongerTogether #Hope #OlympicRefuge pic.twitter.com/m03IBtkIHR

Meanwhile Fouad Idbafdil, a Moroccan refugee based in France, is not an IOC scholarship recipient, so he won't be considered for the Tokyo-bound squad. But he has other more immediate aspirations as part of a four-man ART squad who will compete at the European 10,000m Cup on 5 June.

"My real focus now is to help my teammates in Birmingham to achieve our goal," Idbafdil said. He'll team up with Mohammed, Nait-Hammou and Gabriyesos. All four have met the qualifying standard.

Bob Ramsak (with Lam Joar in Nairobi) for World Athletics

Show me all articles for: